Mrs Mac was not a woman to be trifled with. Even Ava Gardner, the American film star, discovered that the hard way. Ava had boarded a flight from London to Pakistan to star in the film “Bhowani Junction” in 1956 and Mrs Mac, who was a senior air hostess at the time, was in charge of the cabin crew. According to Mrs Mac, Ava was quite inebriated when she boarded the plane and had become abusive to the airline staff. When Mrs Mac told her to mind her manners Ava became even more abusive, so Mrs Mac ordered the security people to physically remove Ava from the plane before take-off.

‘You should have heard the excremental language,’ Mrs Mac told me gleefully, sipping on her glass of white wine and puffing on her unfiltered Camel cigarette.

When I first met Mrs Mac she was already in her sixties. This is a wild guess, because no-one was ever privy to her actual age. Her days as an air hostess were long gone by then. She had abandoned that career summarily after an aeroplane that she was on had crashed into an airport building somewhere in Nigeria. She was so terrified of flying afterwards that she never boarded another aeroplane in her life.

Mrs Mac worked for a bookseller in Melbourne and her role was to supply books to libraries. She was paid a pittance by her employers, but as long as they funded her daily business lunches with her customers, including the wine, she was not one to complain.

She worked for a now long defunct bookshop in Prahran when I first met her. When we had returned from our wedding in England there was a severe recession and Gill was unemployed for the better part of six months. A friend told Gill that there was a job vacancy coming up in the bookshop. We were both very grateful to Mrs Mac for giving her the job.

Thus it came about that I got to know her quite well. She could come across as quite fierce, but she had a soft spot for the underdog. When one of her staff members was questioned by the police for loitering at a public toilet, she behaved towards him as if nothing untoward had ever happened and the incident was never mentioned. This behaviour was somewhat unusual, considering her general attitude towards gay and lesbian people.

At one of her ‘business lunches’ to which I had been invited, Mrs Mac had as usual imbibed freely and was tipsy when her other guest, a publisher, recounted something that had happened to him in Wales.

Mrs Mac peered at him, gripping her chair to prevent her from being dislodged. ‘I used to spend a bit of time in Wales,’ she told us with a slight slur. ‘I nearly lost my virginity on the banks of the River Wye once when I was young.’

There was a stunned silence until the publisher, also under the weather, leant over to me and said in a loud whisper, ‘Good Lord, the mind boggles!’

I realised over time that Mrs Mac was fairly racist as well as homophobic. Despite my abhorrence of such prejudices, I somehow found it easy to ignore these qualities in her. At one stage she frequented a Malaysian restaurant in Toorak Road. She could be terribly patronising to the staff there, in that typically British Raj manner. To my surprise none of them ever took the slightest offence, always greeting her with great warmth by name and enquiring about her health and wellbeing, before going off to retrieve a couple of bottles of wine from her stock that they had allowed her to store in their fridge.

Mrs Mac told me that she had been married twice. One of her husbands had been a Scotsman who had lived in a manor.

‘Why did you break up with him?’ I asked her. ‘You could have had a life of luxury if you had hung in there.’

‘Oh no, I couldn’t bear him. He was one of those people who always had a little black cloud hanging over his head.’

Mrs Mac confided to me one day over lunch that she had had a longstanding relationship with her ‘boyfriend’, whom she had been seeing since before her first marriage.

‘Did you keep in touch with him while you were married?’ I wanted to know.

She winked mischievously. ‘Oh, he’s always been around, even during my marriages. Everyone needs a good friend and a constant in one’s life.’

I was a little shocked. ‘So why didn’t you marry this boyfriend?’

Mrs Mac was horrified at the suggestion and dismissed it out of hand. ‘Oh, no, he would be no good as a husband.’

Mrs Mac’s neighbour in the block of flats where she lived was a fairly well-known television actor in his late twenties. She asked me to lunch one day so that I could meet him. He was an attractive, well-mannered young man. Afterwards I remarked to Mrs Mac that it was quite rare to see young people who were so quietly self-assured, charming and calm.

‘He’s an actor, Tim,’ she reminded me laughingly. ‘It’s all an act. Just last Sunday he threw a terrible wobbly. You should have seen it. He chased his girlfriend out of their flat and hurled a roast chicken at her!’

When Mrs Mac was in her eighties or thereabouts she contracted terminal lung cancer. No-one was particularly surprised, as she had been chain-smoking unfiltered Camel cigarettes for many decades.

On hearing the news, Gill and I went to visit her in a flat in Fitzroy where a couple of her friends were looking after her. She was thin and fragile and she looked her age, whatever that might have been, but her spirit was undented. Sitting down in a comfortable lounge chair she poured herself a glass of wine and lit an unfiltered Camel. ‘Might as well enjoy a smoke and a drink,’ she told us cheerfully. ‘It won’t make any difference now.’ 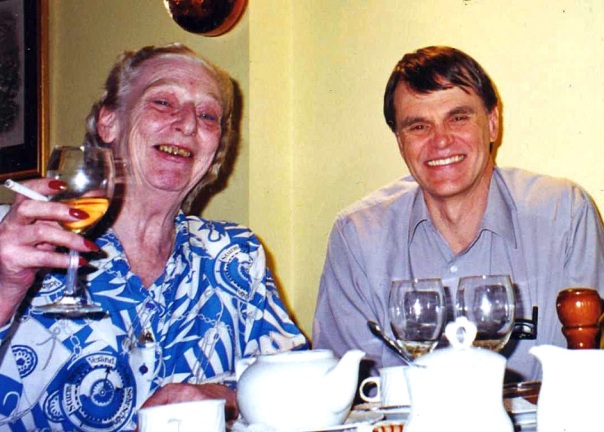